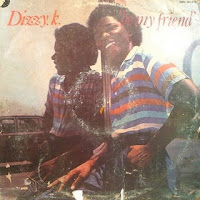 Speaking of Africa... I think I'm gravitating to Nigerian records from 81-83 like the tractor beam from the death star. Just so happens they are all sounding like complete replicas of Michael Jackson records. From Chris Mba, who I posted here before, to this cat Dizzy K. The squeals and yelps, to the rhythmic scats, it all ads up to MJ. Not to mention the bass heavy brilliant disco boogie production perfection they've all got. Dizzy had a number of albums, all seem to be excellent. Don't have them all yet, but working on it. So far so good. Meaning they've all been worthwhile listens. This particular LP is the best yet. And, judging from the prices his LP's command, this is probably the most desired. I remember buying this on ebay. I heard a few sound samples of the tracks and was completely FLOORED. I had never heard anything so funky and so hotly produced. It blew my mind how incredible the few tracks sounded, even though they were crappy ass little soundfiles. This was approximately 5 or more years ago. I was ready to drop some serious loot on it. I put figures into eBay I had never entered before. I was willing to bet the farm on this one, and didn't want to lose it to another bidder. Surprisingly it ended for 13 or 14 dollars, (totally surprised!) a far cry from the hundreds I was willing to spend. Since then Nigerian Boogie records have gone through the roof. I have no idea what this record would go for now, but the last few copies went for 500 to 1,000$.
To me, it might be worth it. All the tracks on here are bombs. Plus, like I said, I'd never heard anything produced so well. Every track sounds like you could make a new Daft Punk song just by looping it up. The back info on the record reads like a synth and drum machine holy grail want list..some of the hottest shit on earth. Trust me this record is made with some of the sickest sounds you've ever heard. Dizzy is still around, and heavy into gospel music. It's still a fantasy of mine to re-release ALL of his LP's, something I can estimate is only a matter of time.

I'm only posting this one right now.. it's kinda too good to let it all out at once..but, I WILL post more from this same album. I may even do a Dizzy K special once I have ALL the Dizzy LP's.

I hope my buddy Juan finds this one while he's in Africa. He just hipped me to his newest project, his blog about his vinyl discoveries while he's adrift in Ghana and general South Africa. He's finding hot shit. We yucked it up a while ago, over a donut at a greasy spoon breakfast spot I like, about his future trip. We talked about all the previous record hounds that have scoured the land. How they never pay 'jack-shit' for records, sadly keeping those peoples VERY poor while making hundreds themselves. How few record hunters there have been 'other than white' in that biz, and how he might be able to connect further being a person of color himself. Finalizing our conversation we both mentioned we thought the most important things were.. the stories, the connections with these people along the way, the music, the art, the experience, the sharing, and NOT just gripping and flipping. I'm proud to say he's not just trying make a fat loot, but doing something deeper. Something he's always been dedicated to. This time he's working new angles and turning up some tasty goodies. Check them out here.
http://digging4gold.tumblr.com/
This is his second trip to Africa, and the second time I've mentioned him on this blog. Must be I love this dude. word.