Those of us rare soul and funk enthusiasts know that when we have a chance to see our heroes on the big screen it isn't that often. We're apart of such a minute crowd that we've learned to enjoy small tokens of our world represented on the big screen. Everything from Snoop Dogg pulling up in a ride listening to 'Bumpin' by Groundhog in that god-awful remake of Starsky and Hutch, to footage of 'Soul Train' in Spike Lee's Crooklyn. 'Thunder Soul' is quite a bit more. More than just sacred footage or soundtrack validation, it's the real story of a band and the people in it, affected by it, and lead into it.

Very few people know about the high school funk of The Kashmere Stage Band. Those lucky enough to have found their incredibly rare records know just how treasured they are. When a frenzy of re-issues brought them to the lime-light everybody wanted a piece of the action. They quickly became one of the most sought after bands in the funk circuit. But, this is more than a obsession of a obscure group, it's a great story. A story that stuck in my head the entire drive home and made people in theater laugh, cry, and clap. Myself included.

The movie is based on the incredible story of Conrad Johnson school band leader (and teacher, aka 'Prof') and the incredible students that made up The Kashmere Stage Band. The footage is great, sounds nice and loud on the big screen, and the filmmakers did an excellent job. I appreciated the graphic design and special effects. It's a nicely done documentary, both informational (who knew their re-issues topped out at number three on amazon!) and inspirational (a truly hear felt story about a great group of people).


There's a bunch more interesting movies that are a part of the 'Oakland Underground Film Festival' including Bolivian female
wrestlers, hip hop dance battles, electronic music, and Rock Steady reggae.
It's a calender that is heavily devoted to music this year.
These are also the same folks that brought us 'Black Dynamite' last year.
check the schedule and additional information here...
www.ouff.com

Read more about this movie and where to catch it in your town...
http://thundersoulmovie.com/ 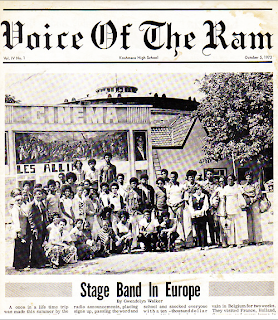