Baba Yaga - Too Cool To Be True 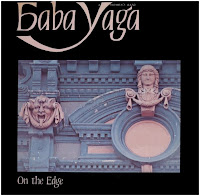 Killer funk jam by this 70's era all women's band. Sounds a bit Afro influenced with these heavy horns piercing through the mix. This one was fit for the club both now, and then according to the lyrics. Swarming to the disco with those uniform denim blues. Look out. These ladies are fired up. Lead by a heavy break in the front, it's charged up with the same shit that's still going on these days..growling stomachs, high gas prices, and people looking for work. This release was distributed by local woman's label Olivia and you can get comprehensive deets and pics here. Probably the tastiest women's funk club tune I can think of and reminds me of the 'all-girl' live performances I saw today.

Yes, I'm still sick from last week and feeling like shit, but I had to make the trek outside in the constant rain to see my daughter perform at the G.R.A.S.P. (Girls Rock After School Program) in downtown Oakland. Sick as I was, I was busy sleeping all day and if she hadn't called to remind me, I may have slept right through it. Daddies, stay on ya toes! It was great (and a great program) to see my daughter rock the drums in her own style and I'm glad I took her to see the Girl's Rock Movie 2 to 3 years ago. I saw a total of 15 groups play one song each, ages ranging from 6 to 16 years young. I was looking at the attendance and over all high head count and thinking there is definite potential for my evolving all ages Oak-a-go-go TV show idea, developed from Chicago's own cable access show Chic-a-go-go. Check out what they do.

While in downtown Oakland, I caught a facebook mention of a record sale. Of course I had to check that out. Sick or not, I was already out there in the rain. I'm in full support of Oakland record shows, and even better when they are in the afternoon or at night. Great little swap at the Spice Monkey Loft organized by Geraldine of feelmygrooves.com and the new east bay multi-genre soul night called 'The Clearing' at the Kingsman's Ivy Room. It's held every third Friday, but April's date is scheduled for the 22nd. Heads up. Been meaning to re-stomp the Ivy Room and see the major re-vamping they've done since our crew was there so many years ago. Props to all those folks at the swap for toughing it out in the rain. Looks as though the Spice Monkey has some tasty food as well. Great idea..the wifey can grab a bite to eat, and I can chip away at our life savings on my compulsion with records.
So, all in all, a nice little day. Even though I felt like absolute crap. I hope I didn't infect anyone along my way. If so, my sincere apologies! Now I'm nestled back in our crib, nice and warm, hopefully nursing this very flu like cold on it's way out the motha-fuckin' door!