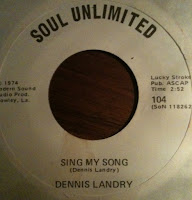 Something bout this tune just does my head in. One of my favorite funky 45's. Probably my preferred tune by Mr. Landry. He had one other pretty juicy 45 release, "Miss Hard to Get" b/w "M’m’M’m’ Good". That 45 may have been a year or two earlier. I faintly remember it being a reply to Mr. Big Stuff, at least of sorts. "Sing My Song" has all the treasured elements of great funky soul. Great Backings vocals, Smart Horns, subtle strings, and equipped and empowered by early synth soundings keyboards. Pure Genius. Starting off in New York City and finally givin' shouts to the 'Frisco Bay' Dennis was spreading his 'song' like a new dance craze. The flip instrumental version "Concentration" is equally banging. Just straight instrumental madness. Whatever that keyboard lick is..I just can't seem to get enough. Pressed in 1974 on Soul Unlimited records, it's one of those soul recipes that has all the tasty ingredients.