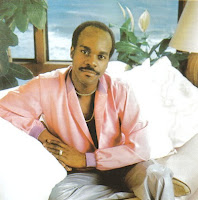 A few things have been simmering in my world, amidst the fight for family health, I got involved in Vamp the record shop, the art and consignment spot I just posted about, and also have now put a release out on my own imprint label Sound Boutique. You'll hear more about that in a few posts to come. Gonna need some room to expand on that whole story. But, first the record release party already happened and was held at Sweater Funk. It was a fun night with a guest set by Ben Johnson, a special guest appearance by Luke Holton of the Nightwind band (whose release is the first project for Sound Boutique) and for those that dared stay into the wee hours a special appearance by none other than Dam Funk. Great nite we all had, and incredible music was played on so many levels. We also had several releases on Ben and my record labels for sale. Ben's label is Risque records and he's got some great stuff already out. And, he keeps me in the loop about future releases and they are all sounding super good. Most of this stuff is mastered from cassette tape and never before released. He's also now writing for the Beat Electric site. We'll dive into more about him and Risque Records very soon.

Little know secret about Dam, usually when he's in town he'll roll through and DJ with us. He rocked an excellent set. Such an educator when it comes to Djing. He grabbed the mic like he always does and this time he sang a cameo of his and Baron Zen's Burn Rubber tune. It's a treat for us always to have him. He didn't disappoint with an all 45 set. He never does. Infact, I can safely say...probably the best DJ I have EVER seen. On some many levels he comes correct. Hopefully I'm preaching to the choir, and you're already familiar. This jam by Leroy Hutson was one of the tunes he played, and I felt like sharing it up on here. I really wished we record that nite... Some major magic went down. Ben dropped wicked tunes and Dam killed it as well. Next item to purchase has GOT to be a recorder!!
Every time Dam Funk comes thru Sweater Funk it's like Paradise for us!!