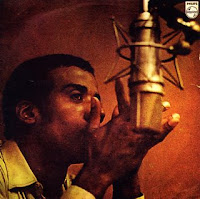 Jorge is easily the godfather of Brazilian music in my eyes. And, judging from world wide respect he's endeared very highly amongst heads both high and low. I have a funny story about a Jorge record that I had at one time and somehow let go. After that I vowed never to sell a single record in my collection unless I had a double. It was the LP with the famous soccer song he did called Umbabarauma. Which is also known as Ponta de Lança Africano (Umbabarauma). It might seem insane now, but at the dysfunctional age of 15 or 16 I hadn't a clue. World music was light years out of my reach. I think even at the time I didn't know if the group was called Africa Brazil or what. I remember thinking it was kinda funky and 'kinda' cool, but not enough to keep it. Honestly I cant remember at the moment what I did with it, whether I sold it, trashed it, or handed it over to someone else. There is also a chance it's still buried somewhere in the poorly organized and shite filled collection. Trust me I have a load of garbage records too. Much too many. But, several years after 'misplacing' it brought be great sorrow to know I had let it slip through my fingers. As I became more and more interested in Latin, Brazilian, and rare groove of all sorts, I realized what a mistake I had made. It was this constant reminder the deeper I went into collecting what a giant flub I had made. It was always in the back of my mind as the one record I faintly remember really wanting, but as times could even muster who the heck the artist even was. Of course finding this notorious LP (if only to me) later in life was straight euphoria, it naturally turned out to be dope on dope throughout the album. As we all know now.
I was haunted by a chorus to a world groove song (or so I thought) that had some faint distant chant like Xica da Silva.


Many years later of course I went through a huge Jorge Ben phase and got re-introduced to Jorge and many other fantastic Brazilian artists. But, Jorge for me was always this mystical and elegantly dreamy artist that especially peaked my interests. His music really transported me somewhere else. The song we're featuring today is from an earlier LP than Africa Brasil but, a prime example of his extraordinary talent. Even more importantly a sample of how his music can be a lush and psychedelic dreamscape. Enter into 'Oba La Vem Ela' and you're floating atop the jungle and whisking through it on some magic carpet mushroom ride. Of course i can't stop there and have to include the masterful 'O Telephone' song from this same incredible 'Forca Bruta' album as well. Such a crazy mix of pop and folk. Strings and African instruments. Deep and introspective sounds like a sick emo indie kid wining and crying, yet one who's dancing on balconies and strutting through town at Carnaval at the same time. I 'still' don't know what Jorge or any of these fine Brazilian artists are actually singing about, but it's almost more fantastic to imagine it on your own.
So, I gotta post both of these...Its just too tempting to not do it. Even if if does yield another copyright complaint against us. Two of the best Brazilian songs on the planet. But, fortunately there's worlds more.