Dohnnie - Dancing Is Your Love 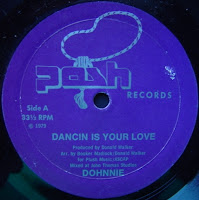 It took me much longer than most to really 'get into' disco. I remember heads were nuts for disco and I was still stuck in a funk rut only stretching out into rare groove. Rare groove was about as close to true disco sound as I was willing to get. I'm still kind of that way. I'm still super picky as to what disco tunes I can endorse. I understand it, and it's all dope to me, and I'm not hating...but, you'll see here on this blog pretty nominal traces of disco. My homies were getting knee deep in Patrick Adams and the Peter Brown sound, but I never really went crazy for it the same way as them. Sure, I'm in love with 'Guardian Angels Watching Over Me' as much as the next man, but never ga-ga over the entire catalog.

This Dohnnie track is one of those exceptions. This is the kind of disco tune that I can fully endorse. So, in a lot of respects the time has definitely come. I'm as into the disco sound as the next head. Furthermore, I'm quite partial to a lot of the Disco Rap I'm discovering. This particular case there's more emphasis on song structure and changes, bridges etc., so this could be considered a R&B jam dressed up in a disco style. There's wicked bongos and a constant perculation of backing rhythms. Combined wah-wah guitars and excellent bass playin' with hand claps makes for a perfect formula for breakers and that's what I imagine for this tune. Like a breakin' scene in a Fame or Flashdance style cheesy 80's movie. Peep the Moog solo at the end. Even me, a minor disco fan can enjoy these disco style backing vocals when properly sprinkled throughout. It's a good tune. I'm sold.

I played this tune at the last Grow Up that I dj'ed. I had a good time that night and they recorded the mix. You can find it here. Randy Ellis had invited me to spin and I'm glad I did. I almost had to cancel. It let me branch out in a few areas I don't normally dabble in. Randy is also one of our newest sellers at Vamp. He's brought good shit in the shop, and been about strictly dope music in my eyes. As you'll hear from the recorded set, it's a bit janky and dis-organized. I really didn't have time to put together what I wanted to play. My Mom was still in critical care at the hospital at that time and when I got records together for the gig I just grabbed EVERYTHING. Ended up being two chock full crates. I ended up only playing 1/4th of what I brought. The stress and turmoil I was going through caused me to over pack. This is why I almost pulled a no show, I almost couldn't make it happen. There was just too much crazy shit going on for me. But, SO glad I came through and did it. The crowd was all about love and people seemed to enjoy my crazy shit. I would have liked to spend a little more time putting my set together, but I still played some good tracks.

So, here's the Grow Up set I did....
Grow Up - Sean Boogie
and, here's the Dohnnie track...
Dohnnie - Dancing Is Your Love 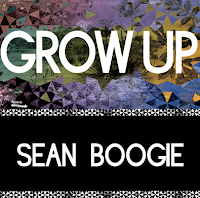 I'll be guest spinning in February 2012 again at Grow Up and have promised all new goodies to share.
It'll be fun. I plan to branch out even more delving even further into italo, disco, disco rap, and electro. Stayed tuned...more deets to come as I'll plug it again a little closer to the date.

Big props to Randy Ellis. He's putting together dope shit left and right and quite the savage behind the decks. Always incredible tunes. And, oops almost forgot to mention his fantastic label of newer boogie, electronica, and future funk>> VOLTAIRE RECORDS!!! check it!

Grow Up - Sean Boogie
Dohnnie - Dancing Is Your Love
Posted by Sound Boutique at 8:15 PM