Its Friday the 23rd of December. Um.. despite the inaccurate date on the top of this page. Don't know what the hell is going with the blogger's dating order! But, the entire year is just about gone. It went by at an astonishing speed. I've come across some truly fantastic records this year and am currently amassing a list of goodies for next year. It'll be a good year for the blog.

Some amazing things have happened. I've released the first official vinyl 45 on the 'Sound Boutique' record label, kick started a Record Shop with Fernando, taken the next leap with my business, and seen my Sweaterfunk family grow and evolve in epic ways. We're hosting a New Years Eve Party at SOM Bar with Opolopo and Amalia for NYE. We've been gigging with ONRA, Dam-Funk, Steve Arrington, K-Maxx, B. Bravo And Starship Connection, The Pendletons, Dj Spinna, and now are welcoming Opolopo and Amalia for a U.S. debut.

It's been a fantabulous year, and now we're gonna top it off. More of our family of future funkers and extended brethren of Space Soul aficionados. It's gonna be another epic night of Sweater Funkin'

I've decided to share a rare German electro tune from Stroer, of which I have to thank Randy Ellis for turning me on to. This tune is light years ahead of it's time and I haven't posted anything quite as genre breaking as this since way back when I posted Supersempfft's 'Let's Beam Him Up', which you should definitely check out. It's really hard to imagine this was made in 1979. Also this is quite similar to Supermax, another favorite of this whacked out genre. More Germans obsessed with synths and seemingly unaware of any marketable tendencies. Like true mavericks, dancing themselves right out of the spotlight.

This self titled album is at times folksy and other times funky rock. This 'Breakfast' tune is laying down the foundation for electro, house and techno. Still it does so with a cool calm soft rock approach, I could even imagine the singer in a white blazer and some top-siders. From what I can gather Stroer was a group of two brothers, Ernst and Hans Peter Ströer (often referred to as Hansi), and on later albums adapted to the name The Stroer Duo. They continued after this LP to record a few albums, journeying into experimental, 'out' and fusion. They eventually developed some notoriety for composing film music. They are also still active and have newer releases from 2008 and a re-issue of a 1985 album in 2010. This tune was also featured on the Elaste Vol. 2 LP.

Hats off to Randy for pointing me to this one, and PLEASE come funk with us on New Years Eve in San Francisco!! We guarantee the usual formula of obscure and mind blowing boogie and modern soul. As always nothing but friendly vibes. And, we're hoping to detour all NYE amateurs!!!
So, join us...stay with us til late. And, unlike the song says...please... stick around and join us for breakfast!! 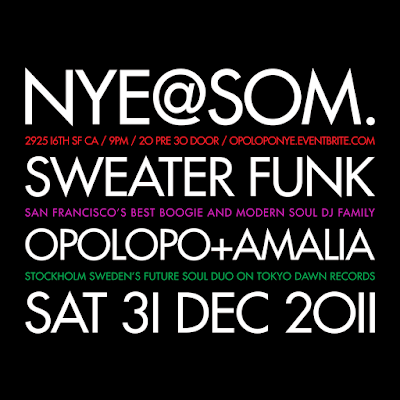 Get your tickets here.


Stroer - Don't Stay Till Breakfast
Posted by Sound Boutique at 12:01 AM