Well, well, well. Right down to brass tacks for the new year. Undisputed new heavy weight super funk. There's few tracks that bang along like a freight train, and this offering from Mr Holmes is one of them. Solid drum filled smoking hot funk goodness. When I stumbled across a few copies of this at a record convention many years ago, I knew I had hit a soul mine. This juicy 45 was desired by all my fellow funk hunters and honestly, I couldn't have found enough to meet the demand. Everybody wanted it. Nice to be able to trade such a caliber of 45. You'll hear why in a second. Eldridge had a few gems along the way, but never a full LP. Sad but true. Under the wing of Toussaint and fresh from Sehorns Soul farm Eldridge had the highest endorsement. With a nice tuff, raspy strong voice he laced tracks from early boogaloo to northern soul to bad ass funk. From 'Humpback' to 'Lovely Woman',  I don't know a tune by this man that is anything short of killer. Spattered throughout labels, Deesu, Kansu, and Jet Set this man assembled a tasty career of one off's. Funk conessuiers should also peep his slow funk banger 'The Book'. Also, for those looking to follow in the steps of Allen Toussaint's smooth take on soul, Eldridge is a sure bet.

This is another fine artist from the New Orleans area, and there's no doubt that the Meter's graced the recording sessions a time or two. In fact it's more apparent on his earlier recordings, but they are all indeed completely rock solid grooves. But, I truely think this 45 takes the cake. Recorded in 1969 during a brief courting by the Atco label it was one of his last few records that he released.  He resumed a normal life in Louisianna and abandoned a recording and performing career. He never had a hit or entered the charts, but was and still is well loved by soul AND funk enthusiasts world wide. Many, like myself think he was an incredible artist with great potential. Just so happens that a few cats in New Orleans felt the same way. Fortunately they kept pushing him and as a result we have a fine collection of 45 to enjoy. Sadly he passed away at the age of 56 but, saw some long over due credit and respect in the deep funk revival of the 90's. Hats off Mr. Eldridge Holmes, we love what you did and appreciate you big time.
Rest in Peace 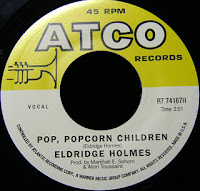