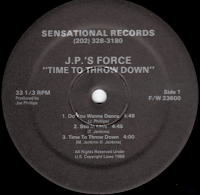 It's right about time. Time to 'Throw Down' some new boogie/modern soul fatness. This JP's Force cut is just what you need. From their rare EP on Sensational Records comes this title cut, and it's a bomb tune. Just a sample that funk can still bump with keyboard slap bass and 1986 was just as funky a year as any. In fact, over the next few posts I'll be adding things from the mid to late eighties. Only to further prove my point. I hope all of you are on board and ready. Because I've been deep into a mid eighties soul and funk binge as of late.
Some of you already know I'm a huge fan, promoter and collector of anything on People's Potential Unlimited. I'm often blogging them up, wearing their gear and spreading news of the latest releases.
It's rare I come across originals that PPU have released, those are usually the tunes that get nabbed up with the quickness and disappear from the web. Or, where never there. I blame it on impeccable taste. The label founder Andrew Morgan puts out quality and excellent material. I've had a long history with this cat, buying from him way back when he was virtually the 'only' cat selling records under boogie, electro, and modern featuring sound clips. That was huge. And, a milestone in introducing many folks to tons of material. Myself included. He's been earth's core deep since I first knew about him. PPU has manifested nothing but pure, raw, uncut goodness and done so with immaculate style and vision. Not to mention a solid penchant for honest dealings. 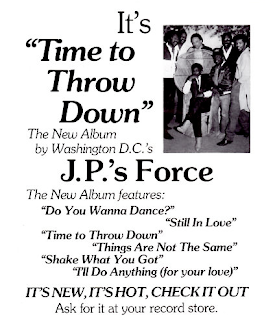 Back to what I was saying... So, its rare I come across originals that have been released by PPU. This J.P.'s Force was released by PPU on 45 perhaps a few years ago now. When I came across this I had to have the original because I genuinely loved this tune. It's robust funk from 86. The rest of the EP is really good too. It's worth seeking out. I think the flip of the PPU 45 has the other best song from this EP. But, a second pressing of this EP originally released in 1990 is available here and there as well.

Heads up, and mad respect to People's Potential Unlimited, Andrew, and the Earcave site. If you're not aware of this great resource your seriously a nappin and a snoozzin'
Check them out here.
http://earcave.mybisi.com/