Ned Doheny - Get It Up For Love 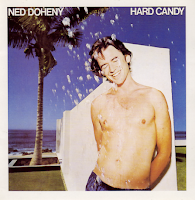 This isn't going to sound entirely fair, but here's another one from the white guys. Partly that's not fair because Ned Doheny is not just another 'anything' in any sense. He's got a remarkable trail of goodies. From his disco rock dancer 'Prove My Love' to a rare 80's LP I still have not found for a reasonable price. Judging from this cover he's being marketed like someone we know all too well, Robert Palmer. Or, the like I suppose. But, Ned has been proving more than his love. He's turned out to be more rewarding than just your average 'yacht rock' shite. Even when you're me...and you LOVE shite yacht rock.
Far from being shite really. Here's a guy who seems to have 'Earth, Wind And Fire' trapped up in his chest and soul is oozing on every album.
This tune start out like the music from Kubrick's 'Clockwork Orange' and eclipses into the loveliest of hippie funkdom reaches a plateau of late night loft classiness. Amazing really, this tunes does my head in quite well. Just so freakin' lazy and cool yet so irresistibly funky.

From his 1976 'Hard Candy' LP this song was also used by Tata Vega for a disco version. Most seem to know her version, but have never even heard of poor ole Ned. Ned Doheny had 5 albums in total and was immensely popular in Japan and Europe. More so in Japan. Several of his LP's also were released in Japan at the same time as over here. Could also be why you can't find any of his joints on this side. All his shit was bought up long ago buy Japanese dealers and collectors. Nice work gang, early appreciation gets the worm. Got to respect that. This only further confirms my suspicions about Japanese groups being heavily influenced by soft rock and blue-eyed boogie. So true, that something in artists like Ned Doheny bled right into Japanese artists like Char. Wait, have I posted anything by Char yet? Ok, shit. I'll get right on that. (I actually went and checked) Ok, it looks like I haven't got to that yet..so, here's what I'm talking about... Char - Shining You, Shining Day on YouTube. But, it'll go up next. But, with artists like Char and Tatsuro Yamashita it's obvious to me, they are replicating this small but delicious genre or, short lived era of groove rock or soft rock soul music. I've heard the young kids these days calling it 'groovy' well, that's certainly true. Kind of funny to us old folks as 'groovy' could just about identify anything.
So, back to Ned. He's the king of shit like this. And, THIS song proves that shit. Whether he took a back seat to Boz Scaggs or Robert Palmer because the FM bandwidth in peoples brains was so narrow or he just didn't get play on radio at all...he still deserves major credit. Credit for making sweet music and doing his thing, which at any time was not immensely popular to be doing.
Mr. Black Dick himself, D.J. Harvey even threw kudos to him and reminded disco folks that before Tata there was Ned by playing him at his gigs. If you're looking for more interesting and groovy white guys and theme music for floating around the harbor in a yacht then check out Ned. But, make sure you're getting on the boat with shorts and Sperry Topsiders or just a white suit with no shirt on. Important.