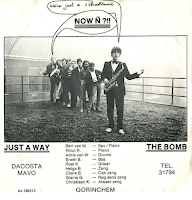 Here's a cute one. From the 'We're Just A School Band' EP released in 1983. I'm not sure what they're saying in this one, I can barely make out the lyrics. What I can make out is cool enough. But, for some kids they come up with a nice lil' art-disco-rock thingy and it's quite charming in its own goofy way. I don't know why but these kids seem to be influenced by The Clash more than just a little bit. Don't you think so? Not sure what it is that makes me think that, but it's odd enough, punk enough, and funky enough that somehow that makes sense. Perhaps its the echoing sax solo. Maybe it's the lyrics about bombs and revolution. Kids make the freshest stuff, totally new, hybrid and free of conventional rules. Other than that, this tune is WICKEDLY African sounding, almost highlife disco funk if you will.
Rad picture sleeve with them on the cover in the early morning mist, maybe in their school yard. Would kill to hear the story behind this one, and how they got to make this record. Teachers are rad.  Teachers are rad. Teachers are rad. Especially if they help kids make reckkids!!!!
From the looks of the names they are dutch, but they're a cool looking diverse bunch. I love how Bass is Bas, Guitar is Gitaar, and if you want me to Zang you a tune, you'll soon learn I'm not the best Zanger. Reminds me of something out of 'I Love You Man' like, when I slappa da bas.
Mon.
So, if you were in this band or had school mates that cut this record give me a call! I wanna talk to you. And, if you've never heard of these kids like me, take a listen to this number and see what these cool kids came up with. 'So when I try to change the subject......' La la la. I'm pretty sure it's like nothing you've ever heard before.