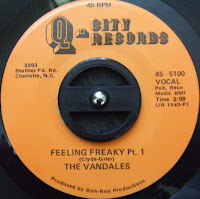 A ridiculously infections party disco groove, cutesy little love bug style song. In fact, the guitar sounds a bit like a bee buzzing about. Not much on these guys either, just this one 45. Great vocals and a groove that you'll have to listen to over and over again to realize how layered it is. It's rich with strings, horns, and some killer flute playing. Again, another record that's layered heavily with multiple guitars. The flip side is part two, and keeps going with more of the same. This is one that may take time to grow on you. But, it's a silent deadly killer. Disco fast food if you will, engineered for your enjoyment.

Update: Right before posting this I decided to re-edit both sides together. So, now you get part one and part two all in one track. I've never posted any of my edits. Not one single damn edit. So, this is a first for this blog. Maybe, there'll be more. But, I really couldn't just leave you with only this one side of this 45. I had to share the extended version. Or, rather make it an extended version. So, here you go..my first edit on the crappy Audacity program. Somebody get me Protools or Cubase PLEASE! Again, this is a true soundboutique exclusive just for you.

I was going to ask a contest question:
Who can tell me at what point the song is edited from part one to two?
(Hint: it's not where you would think it is)
But, two major problems arose with this contest question idea.
1. I have no prize.
2. I forgot where the edit is myself!
Well, so much for that idea. But, for the first official soundboutique edit, it's freakin' CLEAN. Brand new baby spankin' clean. So, clean in fact that it's better than the original studio edit where they punch in the backing vocals. Oh, well. If you can guess it (for example...like 1min43sec) and it's close, you may win something. Or, whoever is closest, still don't know what the prize would be...but, perhaps I can whip something up. Let's just say I'm proud of myself and leave it at that.