Sam Marris - Are You Gonna Stand There 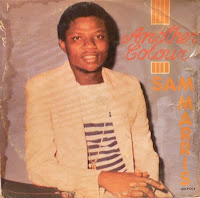 Special shout out to my man Juanito. Honorary soundboutique member and correspondent. Little known fact, he was and still is a pioneer of bringing the boogie sound to the east bay. Now he's in Africa for his second excursion. Sipping drinks and relaxing in Mali, Burkina Faso & Senegal. He's searching for the African heat, combing the beaches and shores, and making connections with beautiful people. He's notified me that he's been keeping a close watchful eye on soundboutique. He let me know that he loves what we do, and give thanks and respect for the tracks. I gotta thank him as well, for helping keeping a flow of dope African records coming my way. Big up Juanito! We loves you up in here! I gotta make that connection and get that LP for a future post. But, for the time being...here's one for you..please find MORE of these!

Here's another killer sample of Nigerian Boogie. This is one that is entirely carried by this stunning and slick as hell bass line. It's just simple drums, bass, synth and guitar but complex in it's syncopation. Just the right touch of brief bursts of brass. The breakdowns are heavenly, first with the instruments, then into the chorus repeat. Simplistic funk. Genius shit. The only thing lacking would be Sam's minimalistic vocals. Still it works for this track and the entire LP. Which by the way is quite good. Sam more than makes up for lacking in vocals with nice arrangements and writing cunning dance floor winners.

This LP, 'Another Colour' is an all around pretty great LP. I'm finding more and more quality Nigerian boogie LP's. One of those occasion where you thought you were almost done, but then the hunt seems to be just starting to take off. More waves of Nigerian boogie that were heavily influenced by none other than big time pop super star and commercial boogie king...Michael Jackson. Loads and loads of LP's with bow ties, black tuxedos, and red leather zipper jackets is the proof. In this instance Sam Marris is sporting a white suit. Not out right MJ clone, but in that same direction.
Most records from Africa are beat to hell. They often look as though at one time or another they've been used to sweep a hut floor. Or, acted as shingles for a shanty on a rainy night. I don't have any mint African records. Least I've never seen one. Could be they don't exist. I'm fine with that. The dirtier the better. Long as the funk still comes through the wax.

Sam Marris - Are You Gonna Stand There
Posted by Sound Boutique at 12:01 AM