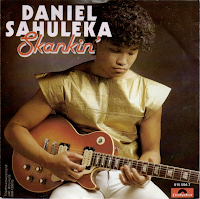 I'm not one to re-tread over already covered territory, but in the case of this song by Daniel Sahuleka, an exception has to be made. Plus, where artists on this blog are given multiple posts, I assure you it is well deserved. Not to mention, I'm un-earthing even more Sahuleka goodness, and will probably post more soon enough.
Let's start with the basics. Dutch born Daniel Sahuleka is actually of Indonesian decent. He started with a self titled LP back in 1977 and he's had a long career and still performs to this day in Holland. He's taken his music all over the world, been given a doctors degree in Yogyakarta, and generally been loved for his positivity in his music everywhere. The last post we featured was "Ev'rybody Feel The Groove" from his 1981 Polydor LP "Sunbeam". This particular entry for Daniel is from a rare single only release called 'Skankin'" This is the flipside called "It's Beautiful". Really it's just a tasty modern soul tune and another Sahuleka tune that I'm completely in love with. 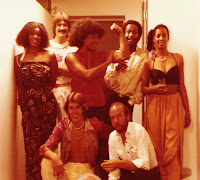 The Pictured 45 above has this great shot of him with his guitar and gold leather shirt..LOVE IT.
I think this is from much much earlier at the beginning of his career. By, 1983 of course he was much older than this. He looks as though he's thirteen. I couldn't find any info anywhere to determine exactly how old he was when he started recording..but again, folks should know by now what the section below is all about.

I wanna thank LAGUPEDIA for posting this in the comments section of our last Daniel Sahuleka post. I appreciate the info and feedback, and although a lot gets lost in translation between Dutch and English with really love comments. It's equivalent to DJ'ing a radio show between 3-5am and actually getting a phone call or two!
I only have this tune on 45 (although it is available on 12 inch as well!) and will be bringing it tonite to Sweaterfunk. It's Kirk Harper's birthday and Annual 45rpm Night. I intend to speak tonite not with my lips, but with the tunes I play...and to Kirk, and the magic that is Sweaterfunk I aptly say..It's Beautiful !!


Daniel Sahuleka - It's Beautiful
Posted by Sound Boutique at 5:39 PM