Sweet Stuff - Freaky To You 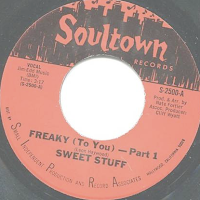 When I first discovered this little 45 on the Soul Town label not only did I know I would treasure this sleazy jam for years to come, but I thought I had found a piece of Leon Haywood history. Sure, song credits are listed as (Leon Haywood) but i thought perhaps he was in this group or started with Sweet Stuff before continuing on his own solo path. I was wrong of course as its now obvious to me it's a a cover of his classic song. But, this is not to say I wasn't already an expert on Haywood's career. I remember finding an LP on Fat Fish at a record convention and going ape shit that I had found a mod boogaloo favorite tune of mine 'Soul Cargo' on the LP of the same name.
Turns out this group Sweet Stuff were paying homage to the brilliant "(I Wanna Do) Something Freaky To You" tune, by funking it out a little longer, holding back strings and throwing in a few more wicked synth farts. It's been comped by Ubiquity on "California Soul" back in... I dunno, 2002? It's Cali soul for sure. They hammer it home that this song is all about 'going down'.

It oozes with sexuality...almost to excess. The moans and groans 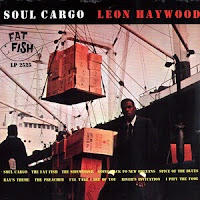 that coat this seven inch... leaving you asking for a towel afterwards. Nothing like hearing a male moaning on a record for a change. They're obviously having some serious hot sex near the end, something that perhaps Leon, being on a more commercial label (20th Century?) couldn't really get into. Too bad, but thank the heavens for Sweet Stuff and their one-off sex romp. 'Even the sun goes down'...thanks gang, lesson learned. We're all just trying to get a little bit o' head in life. Right?

Sweet Stuff - Freaky To You
Posted by Sound Boutique at 6:24 AM