Broken Glass - Rather You Than Me

Nuff props to my man Young Lou. Ever since Young Lou Skywalker, aka 'Two Step Lou', aka DJ Auto, has stepped aboard the 'Sweaterfunk' committee he has proven he's more than just a pad-won learner. He digs deep, deeper than most. And, he's done his share of hard work to unearth head spinners whether you're into modern soul or deep funk.

He's already brought the light of day to a few tracks that none have heard before, and is quickly etching himself into the ranks of Tom Noble and Andrew Morgan with the genius tunes he's been exposing. This tune by Broken Glass is one of them.

Please check out Lou's blog.
http://killasoundz.blogspot.com
be sure to check all of his mixes.
There is dope stuff within his mixes. He's making waves as a real pioneer, by exposing tunes and pushing the boundaries of what's gettin' play. I've got to personally thank him for a hand full of real gems he's put in my greasy fiendy record collectin' hands. And, I think you'll find a wide variety of interesting stuff on his site and within his DJ sets. It's all too rare these days to find a cat that plays 10 tunes in a row that no one has 'hipped' him to, and rather that he's personally 'dug up'. Seriously Lou, hats off.  As many of us who know him have said, the force is strong with this one.

Broken Glass is Joe Egan and Gil Stone.
This funky rock chune is most definitely on a mellow late night vibe. I played it at the end of the nite at the now defunct "Fo Tha Funk Of It" that we were doing in Oakland earlier this year. Definitely 'late night' and seedy and smooth. Did a fine job of turning the crowd around on a mellow evening and I topped it off with a little 'Lakeside - Something About That Woman'. It may be hard to obtain this little 45, as the guys in the band have the only copies. Both of them still in the music production and recording biz, Gil Stone still does his own brand of indie-alt hybrid funk rock called Steep Hill. 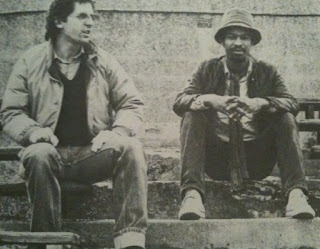 Lou gave me this track, and without listening to it, I knew it was a winner. And, indeed it is an absolute BOMB. Anything with his stamp of approval, I won't even remotely question. Pure bred funk connoisseur he is. As Yoda would say.


Broken Glass - Rather Me Than You
Posted by Sound Boutique at 12:28 PM