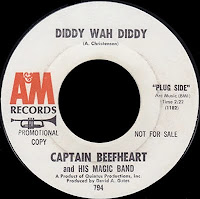 So sad to hear of this man passing away. It has truly been a landmark year for the passing of our musical heroes. One right after another from all fields of music. Big bummer, but always an ample opportunity for adjusting the spotlight in their direction.
I first heard this tune on KALX 90.7 FM waaaaay back in the day. There was some kinda special on 60's music. I must have been 16 or 17 years old. It was many years later until I knew who exactly it was that had blasted through the radio. I had never heard anything so heavy and nasty and this blues R&B number had never sounded tougher. I think Bo Diddley would approve of the treatment.

Blazing with some of the baddest harp and fuzz guitar I had ever heard, this track seriously, seriously rips. It rips through your ears like a chainsaw. Captain Beefheart has forever been bad ass in my eyes. All of his huge catalog has been entirely entertaining to discover. From his fuzzed out R&B antics to the hybrid strange rock sound they had later on. My homie Kool Kyle pointed out to me, that if you were searching for where Nerd got their choppy syncopated production sound, it might rest right in a few of Beefheart's tunes. Purely coincidence? Possible. But, the Captain was well know for innovation and adversity.

Their brand of rock and roll infused jazz, soul, punk and garage. They seemingly had no commercial interest. They were even so experimental that any momentum they had acquired by this 'hit' single, dissipated by 1974 and drove the group to break up. They eventually formed again and put out three more albums. But, Beefheart has never been a sell out. Far from it. Or, seemed to have any interest in 'success' other than doing things a bit different. But, that odd touch, that different approach did yield them quite a bit of acclaim. Rolling Stone praised 'Trout Mask Replica' as a masterful piece of work. And, fans like myself are all appreciative of the things that the 'Magic Band' laid down.
The Captian's real name is Don Glen Vliet. He was truly an innovator and pushed the envelope in his music. To that we say Thank YOU. Enjoy this slab of 60's punked out R&B be you caveman or cavewoman.