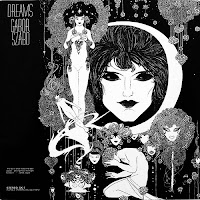 Not only is Gabor an amazing guitarist and prolific jazz musician, he was an incredible innovator. He started experimenting with eastern sounds and innovating very early on. I got sucked into the Gabor world pool with his Jazz Raga LP. That was the first 'real' Szabo ticket for me. Back in my mod days I'd always try an album with a girl on a scooter, throw a sitar in the mix, then I was really sold.
Turned out to be more that just a cool cover. An LP rich with texture and feeling, stopping throughout the world to pick up varied influences. It began my 'branching out' into other areas, and I've gotta thank Gabor for that. Time to delve right into a nice Chai tea on a rainy day and peep a Fellini movie. And, I think Gabor still represents that for many with his music. His eastern influences and Hungarian descent set his path and direction for virtually all of his magnificent career.
So, here's the real bread winner. Later on, a friend turned me onto this 'Dreams' LP by Gabor. This tune 'Galatea's Guitar' is a major mood setter. Much of Gabor's music is this way. But, in particular this tune just seems to open up, right into an oasis of head nodding trippy jazz funk paradise. The intro is a bit long, the tune doesn't really start until about 1:44. But, like I said the mood is being set and the wait is well worth it. It is perhaps the closest to a 'dream' tune. 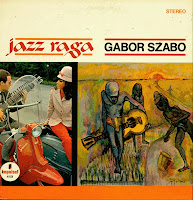 I'm going to include my two favorite tracks from 'Jazz Raga' as well. Both 'Walking On Nails' and 'Raga Doll' are fantastic and an excellent starting point if you've yet to travel to Szabo-town.
Originally from Hungary, Gabor has a long and prolific catalog, but never got the appreciation he felt he deserved. He once publicly complained about never getting credit for a well known George Benson song. His claim was that 'Breezin', a huge success for Benson, was basically 'his' song. Thing is, most of us DO appreciate this man and have the highest regard for him. There was a huge resurgence and flow of popularity for him and the likes of Cal Tjader. Those two men started the Skye record label and those releases are also hugely regarded amongst us 'Rare Groove', 'Acid Jazz' and 'Latin' connoisseurs. Thumbs up Gabor, and Rest In Peace!