The Poppy Family - There's No Blood In Bone 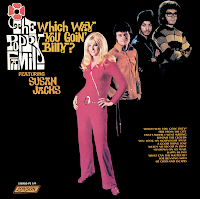 A few of you may already know that my line of work, or rather that my day gig is 'moving'. The other day I worked my first 27 hour day. Probably highly illegal to work that long, but in this 'biz' 8 to 10 hour days are the 'norm', and 12, 16, and 18 hour days are not unheard of. But, this was truly a first for me. The amount of 'drivetime' alone included 16 hours. So, this particular day was a first.
It was also a first for observing our customers with quite possibly the deepest taste in tunes. It was a first that our customer was listening to The Poppy Family AND on vinyl. This was truly NOT an everyday occurrence. It's rare that anyone is listening to music when we show up. A good sign of course, but listening to music on vinyl is a step further and completely unheard of. When I first stumbled upon this LP it was in shiny mint condition. I knew that if I heard it and it was remotely good it would suffice for picking it up. The picture alone on the cover was worth the fare. A voluptuous blond in a serious hip bad ass bodysuit. A Poncherellie (Erick Estrada) lookalike in a western shirt. An Indian dude in a Turban. And, the world's first mutton chop serial killer. A bunch that looks like something truly good is in store. I thought even if the LP completely sucked, I would still be stick with this awesome cover.

Low and behold, this album turned out to be killer. A merging of pop, heavy psych, folk and country. Seemingly influenced by Nancy Sinatra and Lee Hazelwood, the Combo of Susan and Terry Jacks (pictured from left to right) wrote this amazing material. They later went on to make several solo efforts including the genius soft rock classic 'Seasons In The Sun'. The Poppy Family were incredible. The blending of congas, sitar, lush strings, heavy guitar all in an LP chock full of brain melting goodness. I believe they had one other LP after this. But, only two or three releases under Susan and Terry Jacks after that.'There's No Blood In Bone' is probably the best tune on this LP, but the rest of the album is still awesome too. I believe this song was sampled by someone familiar, though at the moment I can't place it. That would be hard to resist considering the banging relentless drums in this tune. There are many other tasty sounds on this one, and I would highly recommend picking it up. This is a great and obscure psych-pop LP and thanks to our customer I was reminded of it's brilliance.


The Poppy Family - There's No Blood In Bone
Posted by Sound Boutique at 11:38 AM