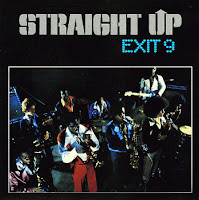 Just recently came across this LP again and wanted to post it up here. More and more lately I've been trying to get back 'out' in the crates. I'm usually quite content with a small amount of 'field work' and prefer to 'e-dig' when the family is safe and sound asleep. But, making my way back down into the trenches has been fruitful to say the least. Not that I never get out in the stores, flea markets, conventions and so on. But, lately I've been trying to get out more often. Usually, I only see the same old stuff I already have, and because I'm not a seller, double just tent to collect dust. They do tend to act as vehicles to get posted here though.
I had originally planned this tune to make an appearance on my mix 'Heavy Duty Shit' Vol. 2, and now I'm trying to make that happen a little sooner. It also reminded me of the bluesy funk that my Brother digs, and he was just in town again staying at my crib.
He picked up the 'Light On The South Side' LP and book by Numero Group and we were drolling over it. The amazing photos reminded us of the blues bar we grew up around the corner from. I'm realizing that my snobby 'original' wax only policy is keeping me from some of this incredible stuff. The new Syl Johnson box set looks and sounds incredible. I need to get them shits!
Speaking of re-issues, this LP was origianlly released in 1975 on the Brunswick label, but re-issued in 1997 and again by Soul Brother Records in 2002. It's a fantastic LP, solid from start to finish, and containing mostly moving numbers. It's polished, powerful, brassy and funky as shit. My favorite tune is 'Miss Funky Fox' but 'Fly' is pretty dope too. To compare them to a larger mainstream group, I'd say they are closest to Tower Of Power. With a big horn section, hecka band members, a funk heavily rooted in the blues, and smoking hot vocals by Johnny Rios only solidify this comparison.

'Miss Funky Fox' is seriously glowing hot. Just the imagery that comes to mind when you hear this is incredible! I can almost see the carpet on the floor holding the drum set steady, yet it's still got that heavy movement back and forth. You can feel the mesh on the amps shaking and the hands slapping the congas. I've used this term a few times before, but Exit 9 qualify, as they sound like they're coming through with the power of a freight train. Rock solid funk here indeed.
The band members were incredibly young when the group formed and most were 16-20 years old when this record came out. An incredible offering from these young cats from New York. Exit 9 were originally called Qualified Funk and at the time of this finely produced record, they were 9 members deep, although a guest singer on one of the tunes is credited on the liner notes. The majority of these tunes are fast and uptempo and are definitely all killer no filler. It makes sense to me that this has been re-issued twice and remastered as well. Enjoy this tune from their sole LP and see what incredible potential they had.