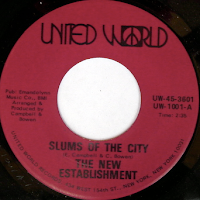 I scored this at one of the better record shops in San Francisco for 5 bucks. Granted it was a while ago, but still such a great shop. Wonderful really. I'm talking about none other than Rooky Ricardo's on Haight street of course. The shop is run by Dick Vivien. Dick's been supplying the local area with soul flavor for ages. I've been going there for as far back as I can remember. It's always a great shop to hit up, and I've always found good stuff there. You have to be willing to get on your knees (no pun intended) to scour and search through the endless piles. But, I've found some goodies in the stacks. Dick is always willing to keep an eye out for anything you're looking for and often is a great resource. I would imagine it's hard for him to remember everything you're after, but he definitely knows his music and will always try.

Dick is also quite the dance enthusiast and will show you how to do the Football, or the Madison, or the Funky Broadway, or the Funky Chicken..exactly how it was done back then. He's actually given dance lessons at the store. He's full of great ideas and that helps keep music alive and fresh at his shop. KOFY TV 20 had a dance show on Sunday mornings (or, was it Saturdays?) and I used to see him dancing on that show. I think they've brought the TV 20 Dance Party back? I thought I heard someone mention that recently.

Funny factoid...going way back to the early to mid 90's....I once DJ'ed a monthly party there. My good friend Seth Roehl, who was at the time, partner with Dick, and had pioneered the idea of throwing DJ nites there. Imagine that. I've still got the flyers somewhere around here.
If you're coming to the city any time soon, this is a place not to miss. I think they've kept alive by stocking good stuff, pursuing soul 45's and offering mix tapes and recordings to the local SF community.

I found this 45 in their five dollar box and thanks to some funk comp knew exactly what I had just scored. Actually I had really wanted this tune for some time. It became an anthem for me and became a tune that got played every funk party I had something to do with. 'Ridin' High' by The New Establishment is an ultra tasty rare groove bomb. It's the flip side of 'Slums Of The City' which is also gut busting deep funk (apparently NOT working on me anymore) that will pack any dance floor. But, it's this cleaner, more mellow, morality tale that captivated me. Perhaps it's the minor cordage, or the killer falsetto vocals, or the swooning harmonies. Whatever it is, it's always completely drawn me in. Released on the killer looking 'United World' label with the peace symbol in the super tight font design.
This is another one I'm happy to be posting. I did not see it anywhere else on the net or on other blogs. I wonder why. Perhaps I'm not looking in the right places. But, this is too good to just keep a secret and I'm glad to share it on SB.

The New Establishment - Ridin' High
Posted by Sound Boutique at 9:18 AM