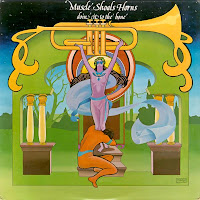 I've been looking for opportunities to traverse the blog into the rock and pop direction for a while.  I picked up some really nice rock records on the last digging excursion, and judging from the above banner that I made, you can easily guess I'm ready to go. I'm super excited about the stuff I've found and can't wait to share. But, first...

I gotta indulge in another wicked slow funk burner. These cats were obviously from Muscle Shoals, Alabama and they've played with the likes of everyone from Elton John to Parliament-Funkadelic. So, the connection to the rock world is there, but just like even the rock stuff I post it will probably have a 'whole lot' of soul. Starting off as a mostly studio band, their next move was recording a few LP's in the 70's. Originally known as the Fame Gang, their studio session work list reads like a dream team of soul heroes. With the complete package as the Muscle Shoals Rhythm Section they recorded with Joe Tex, Wilson Pickett, Aretha Franklin, Etta James, Candi Stanton, and Otis Redding. Those are just a few of the bigger names. The smaller and lesser known artists they recorded with you will find throughout this blog. Basically I'm a huge fan of the sound, and most soul lovers feel the same. Incredible stuff from this part of the world, and these guys became legends.

This is a prime example of their tasty and smooth brass touch. Throughout all of their albums the horns are simply wicked. I don't think I can compare them. The spaced out trippiness of this song sets the mood of a hazy and seedy addiction. Off set with delicious synthesisers and swirling strings it's become a rare groove anthem. Amidst the echoing and dripping wall of sound they create with this track, they do something they didn't do much of on earlier LP's, sing. Harrison Calloway takes the lead on this one, and I'm thankful he graced the mic. The backing vocals are really nice too. On later LP's (and up until the 80's) they featured more and more singing. That helped both to define their sound and make songs like this that were vocal driven possible. Edging out and away from studio 'sounding' stuff into the fuller works of the soul spectrum.

This tune never fails to get practically everybody swaying back and forth and singing 'baby, I'm addicted' every time it gets played. True funk anthem material here. Aside from the 80's funk bombs they offer, this is probably the sickest track you can find by these guys. Usually it's a dollar bin find, but it's getting much, much harder to find these days. As is everything else that's good.


Muscle Shoals Horns - Addicted To Your Love
Posted by Sound Boutique at 1:26 AM