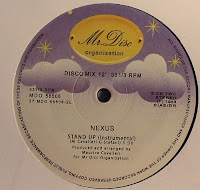 Although I really like the vocal version of this song, I had to up the instrumental for the fans of quality electro and proto-house music. It's a really great tune and stands well on it's own without the vocals.
I'm usually a fan of italo tunes with vocals yet, I notice a lot of DJ's that play this kind of italo usually side with the instrumental versions. Sad because sometimes the vocal version have such clever melodies and usual approach. Again, this has been a big point of mine, but you'd have to have an interest in slightly off components in vocals. The italo touch on vocals usually means heavy accents and mispronounced English. Something I've truly grown to absolutely LOVE.
Another thing that is so incredibly great about italo like this, is that even though it's raging hot disco, super slick funk, and banging soulfulness... it's so devastatingly the undeniable 'roots' of new wave.
The snappy rapid fire kick drum brings to mind the proceeding New Order jam 'Blue Monday'. The piano sets the cloud gliding mood like an unreleased Scritti Politti song. That constant arpeggiated synth rests this tune in the electro hall of fame for sure. Just a nice tune. One that I've been wanting to around to posting. One for my fans of italo disco!

Nexus - Stand Up (Instrumental)
Posted by Sound Boutique at 11:59 PM