Oliver Sain - On The Hill 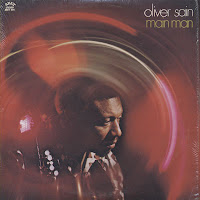 My first experience with Oliver Sain was somewhat checkered. I had a relatively bad first few outings when discovering his records. His first record that I found was 'Blue Max', a really cool 'looking' record with hip people on the cover dancing in some sporty dance spot. Turned out to not be the greatest of albums, probably third on his list of three LP's for my tastes. Yet, this was an album that registered a few hits for him with 'Party Hearty' and 'She's A Disco Queen' but quite possibly ended his disco efforts at the time. Then, if luck had meant for us to not meet again, I found 'Bus Stop'. Also looked promising, featuring a double exposure of people getting on a bus. This LP also had a few songs that charted for him including 'Booty Bumpin' and the title track. This LP 'Bus Stop' also prompted a UK tour and wider exposure. Again, looked a lot cooler than it actually was. Not to say that it wasn't good, just not mind melting instrumental heavy weight funk, which was what I was really looking for at that time.

Keep this in mind...these LP's are all amazing works of groove jazz and discofied funk. All of them are top notch. When I say I wasn't initially impressed, please keep in mind I am SUPER picky. Then, finally at last, I found it, the one LP with not just one, but two incredible tracks. Both a bad ass jazz funk instrumental and a deep funk club tune were on there. I couldn't believe it. Finally I had found the one and only grail of Oliver Sain. Again, not to discredit his other offerings, I have them all and don't want to part with them, so that says a lot. But, like I mention...this one LP had the 'real' head nodders and the dance floor packer as well.
So, As it turns out, I discovered these LP's in the opposite order that they were released. This LP 'Main Man' was the first to be issued in 1972.  Then 'Bus Stop' in '74 and 'Blue Max' in '75.

'On The Hill' is such heavy mood piece. It slithers around like a anaconda seeking prey. Just raunchy funk. This is great soundtrack material, could have easily complimented any exploitation flick. Hip hop producers seem to agree with me, as this track has been sample a few times. A big broad bodacious mood with funk texture for miles.
The other track from this LP is the classic funk DJ spin 'St. Louis Breakdown' in which he mentions San Francisco! Both 'On The Hill' and 'St. Louis Breakdown' saw release on 45 as well as on this album.
Oliver was vital to St. Louis music history and continued to work and perform there until his battle with bone and bladder cancer was lost in 2003. He started out as a drummer and played with Little Milton, Sonny Boy Williamson and Howlin' Wolf in the wee wee early days. He later got into producing and recording and ignited the careers of Fontella Bass and Bobby McClure. Then he took to the Saxophone, recorded these LP's and never put the sax down. He also has an interesting LP from 1981 on Houston Connection Recording Corporation label which has some funky moments and some tasty sounds thanks to the ARP Synthesizer.
All in all, Oliver's contributions were high in quantity and his efforts well received. I started out probably with his most watered down and eventually got right on down to the real heavy weight nuggets with his best. Now, I appreciate his work as a whole, and as a whole lot of great sound.
Check out this cool little local St. Louis TV bit on him...
KETC - Living in St. Louis with Oliver Sain
It's cool how he mentions being into the music for the satisfaction and reward of helping another artist towards success, especially because he probably made very little money.  Either way...Oliver Sain we appreciate YOU!! Rest in Peace! We'll honor you up on the hill!!

Oliver Sain - On The Hill
Posted by Sound Boutique at 11:52 PM