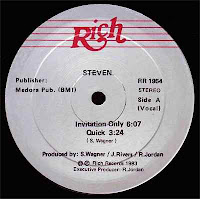 So... the master blaster himself, the leader of the new generation funk, the innovator, the king pin pimp of sexy and the artist formerly known as...yes, you guessed it...PRINCE is playing in my town tonight. Two nights at Oakland Oracle Arena, of which tonight, Wednesday is his second show. Dang! I wish I could see him!! I mean DAYUM! Even though I'm not the biggest Prince fan in the world, come on! you gotta love Prince! I still know what a rock, funk and soul god this guy is. I mean, shit! When was the last time he played here? Ten or fifteen years ago? Crazy right? And, when will he play again? What really made me chuckle was he booked two nights separated by one day. Probably because he likes to party sooooo damn hard. One show, one day of partying, it makes sense right? I'm laughing out loud.

Prince being in town made me think about other groups and artists also from his home town of Minneapolis. Like The Time, Terry Lewis and Jimmy Jam, they all hailed from that area.
It also happens to be that this other 12 inch that I've been luggin' around is also from this same area.
This fine instrumental by Steven called 'Quick' is a good example of early Minneapolis 80's funk.
'Quick' is the flip side to 'Invitation Only' on the rare Rich Records label. It's a tasty almost under developed groove with sparse vocals in the beginning and instrumental throughout the rest. Except for the amazing and lovely whispers sprinkled here and there. Thumbs up all the way! What's so completely wicked is the syncopated bass groove, slapping away, hitting back and forth. If this kind of synth sound can be described as a space fart (which I've heard the term used before) then this song has a bad case of diarrhea. But, we like it. LOVE it. This case of space diarrhea is a truly good thing.
Steven - Quick
Posted by Sound Boutique at 11:03 AM